Edoardo will be competing in his third Star Sailors League Final as crew for George Szabo. Edoardo is a gentle giant due to his friendly nature and stature of 190cm and 105kg. Away from the Star Class, Edoardo sails with the Shockwave Team, winning numerous Maxi Class events, including the RORC Caribbean 600. Also the RC44 one design circuit, TP 52 and the America’s Cup with Mascalzone Latino in 2007.

EN: Staying away from my family and my friends is always hard and I would have loved to be an engineer.

EN: I don’t like cocky people or people that let you down, traitors make me angry. Happy and trustworthy people are my choice.

EN: Alberto Tomba, the best Italian skier ever, I followed him when I was young and he won so many Olympic and World Championships in the slalom â€“ Tomba La Bomba!

SSL: What film inspires you and why?

EN: Film on Jonah Lomu, the rugby legend, called Anger Within. Jonah Lomu, had a difficult childhood but became an amazing young talent, he was a world-beater and as a man he had to fight a terrible illness.

SSL: Is there any technique you use when competing to help you motivate?

EN: Simply I concentrate on working harder and performing better.

EN: Super Strength! I would need it for the SSL Finals, as the conditions are usually big and powerful in Nassau! 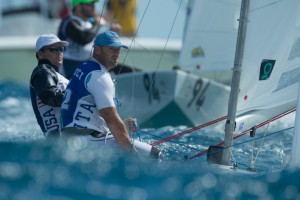