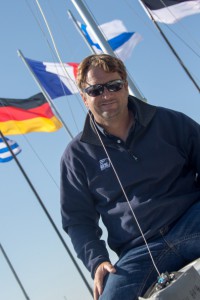 In December 2015, George Zsabo will be competing in the Star Sailors League (SSL) Final in Nassau, Bahamas, it will be George’s third final, sailing with Italian crew, Edoardo Natucci. The SSL is a new concept in yacht racing, where sailors from the Star Class compete with VIP sailors from other disciplines, such as the Finn and the Laser. All SSL events have a knock-out format and prize money.

Growing up George Szabo’s father raced Stars, which led George to grab the tiller when he was a young teen. Since then George has competed in many Star World Championships, winning his Gold Star in 2009. George has also won the Silver Star on four occasions, as North American Champion. In September 2015, George Szabo, with crew Patrick Ducommun, won the inaugural SSL Lake Grand Slam title on Lake Neuchatel, Switzerland, becoming Swiss Open Champions.

GZ: I enjoy sailing. Sailing is fun. Family is the Sacrifice.

GZ: That guy that keeps tacking on me!

GZ: The guy who does not tack on me, and give you space to race my own race. 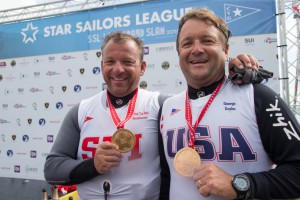 SSL: What music inspires you?

GZ: I always like listening to Sean Paul albums when traveling, but when I need to hike hard and grind it out, I seem to get the second part of an old Dead Milkman song ‘Bitchin Camaro’ stuck in my head.

SSL: Is there any technique you use when competing to help motivate yourself to work harder?

GZ: Tell yourself that your sailed like crap yesterday and you need to do better today. Not sure why, but some regattas are just regattas, and others you just know that you want to win. But Iâ€™ve won the best regattas by focusing on basics, working hard on the small goals, and looking to sail conservative to place in the event â€“ not expecting to win. I Sure would like to know what the other sailors say to this one.

SSL: How many Golds/World Championships is ‘enough’?

GZ: Dunno, I only have one worlds, but 20 Nationals championships. Perhaps I had better concentrate harder.

GZ: X-Ray Vision. Dunno why, just though that was really neat from five years old or so.