Pierre-Alexis represented France, along with his partner and six-time Olympian Xavier Rohart at the 2012 Summer Olympics. The French pair took Gold in the Bacardi Cup in 2012 and won the ISAF World Cup series in 2009 and 2012. I his early career, Pierre-Alexis competed in the Soling and Finn at European and World Championship regattas. This December, Pierre-Alexis Ponsot will be crew with Xavier Rohart for the third Star Sailors League Finals in Nassau.

PAP: Spending less time with my children who would prefer me to be Superman!

PAP: The tiger because it is strong, elegant and fascinating.

PAP: Carl Lewis achievement in Olympics in Los Angeles showed me the way to make a career out of sport.

PAP: The Prince by Machiavelli because of teachings: â€œEveryone sees what you appear to be, few experience what you really are.â€

â€œThe lion cannot protect himself from traps, and the fox cannot defend himself from wolves. One must therefore be a fox to recognize traps, and a lion to frighten wolves.â€

SSL: Is there a technique you use to help motivate yourself?

SSL: If you could invite someone to dinner from history, who would you choose? 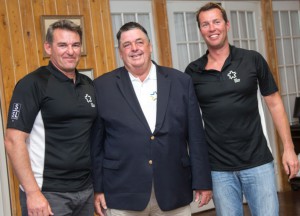