The 4th edition of the Star Sailors League Finals kicked off in earnest today with two qualifying races. The early exchanges confirmed the amazing quality and depth in the fleet, which contains no less than 16 Olympic medallist among the skippers alone. The trade winds have been consistently blowing for days before the regatta and the sea state was a significant factor, especially as the racecourse was at the very top of Montagu Bay. Squall activity affected both the wind speed and direction, with the breeze ranging from 10 to 20 knots and oscillating 30 degrees.

Diego Negri:
“It was a great day, not an easy first one though, lots of wind changes and waves. We had a good start on the first race, we were on the left, fought among the top five at the top mark and finished third. For the second race the wind increased a little bit, we decided to start more in the middle of the fleet and we were leeward to the fleet, got a big righty and it looked good, we had a nice fight and with a great downwind leg we finished second.”

Robert Scheidt is back at the SSL Finals having missed out last year due to his Olympic Laser campaign. Sailing with Henry Boening, the Brazilians were first to the top mark and were never overtaken, winning the first race of the regatta. Americans Mark Mendelblatt & Brian Fatih, were never out of the leading pack and finished second. Italians Diego Negro & Sergio Lambertenghi showed good speed and consistency to take third.

Robert Scheidt:
“The first race was very good, it was a good fight with Mendelblatt and Negri. We are happy we were able to hold them off and won the first race. The second race wasn’t so good, we made some technical mistakes but we finished within the top 10 and that was our goal.”

Race Two got underway after the top mark was moved to accommodate a big wind shift, and it was a blanket start, with virtually the entire fleet hitting the line on the start gun. SSL City Grand Slam champions, Xavier Rohart & Pierre-Alexis Ponsot copped a turning penalty in the first race of the regatta but the Frenchmen came back fighting in Race Two, taking the gun ahead of Negri & Lambertenghi. Jorge Zarif & Bruno Prada sailed intelligently upwind, and showed great technique downwind, to claim third.

After two races, the top VIP team was Jonas Høgh-Christensen & Stevie Milne, with two sixth place finishes. Putting the Danish/Northern Ireland combination in seventh place. Høgh-Christensen is a phenomenal Finn sailor representing Denmark at three Olympic Games, winning the Silver Medal at the London Olympic Games after an epic battle with Ben Ainslie. However this was the first time the Great Dane has even raced a Star.

Jonas Høgh-Christensen:
“We had a very good feeling with the boat, we tried to keep it simple and stay our of trouble. We had a couple of bad starts but managed to recover quite quickly after and sailed fast, both up and downwind, especially downwind we are fast. It was super fun and we really enjoyed it!
I love the Star, it’s tough, it’s technical, but with the free pumping it really comes in handy being a Finn sailor. The conditions couldn’t be better, it’s sailing in paradise.”

The youngest skipper taking part in the 2016 SSL Finals is the 22 year-old Argentinian VIP Facundo Olezza, racing with Portuguese Finn and Star sailor, Federico Melo. The rookie notched up a fifth place in the first race and ended the day in 8th position in the fleet. 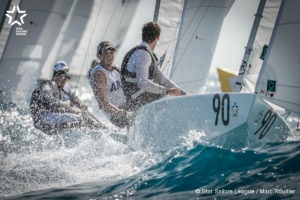 Facundo Olezza:
“It was unbelievable to finish fifth in the first race! I personally try not to think about all of the names of my competitors, if I think of what they have achieved in their careers I would be more respectful than what I should be. So I just try to do my best, go out and sail. On top of everything try to enjoy it. The opportunity to race among these champions is one in a million. I am really happy to be here and I am learning a lot from Federico Melo. I love the Star, I don’t know what I was doing when I was sailing the other boats, from now on I will try to do some races on the Star along with my Finn Olympic campaign”.

Racing at the SSL Finals 2016 continues tomorrow with the second day of the Qualifying Rounds. A maximum of four races are scheduled for tomorrow with live coverage starting at 1100 (GMT-5).

Full coverage of all four days of action will be streamed live on the Internet with expert commentary from special studio guests, including America’s Cup four time winner Dennis Conner and Olympic silver medalist in London 2012 Luke Patience. On the water, the latest in hi-tech camera technology, as well as Virtual Eye 3D Graphics, will provide thrilling viewing.

Since our audience is present in all parts of the globe, Internet will be our stadium. From November 29th to December 4th, regattas will be streamed live on http://d40hnzgvx.preview.infomaniak.website. A complete live video stream of the races as well as additional insights provided by the state-of-the-art tracking system developed by Virtual Eye for the America’s Cup will allow people from over the world to follow their favorites and to cheer for them. Many prestigious sailing websites around the globe will also share our live broadcast on their homepage.