The curtains are about to be unveiled, with the grand Opening Ceremony at Government House of the Bahamas in Nassau at the presence of Her Excellency Dame Marguerite Matilda Pindling, the 4th edition of the SSL Finals will be officially underway.

A delegation of 20 SSL representatives will meet at 4.30pm with Governor General in a Courtesy Call, who then will join the 300 guests in the Veranda where all of the 25 teams attending the SSL Finals will be introduced. It’s the first time that Star Sailors League and the Regatta Desk at the Ministry of Agriculture and Marine Resources work together to bring the SSL Champions closer to local sailorsand their traditional sloops sailing in the Best of The Best Regatta, on Sunday December 4th, the day after we’ll crown our 2016 winners.

Racing will start tomorrow, November 29th, a few miles out of Montagu Bay in Nassau. For the fourth year in a row, the best Star sailors in the world will compete for the 2016 title and the biggest share of 200,000$ prize pot, in the clear blue waters in front of Nassau Yacht Club.

As always, the quality of athletes competing is astounding, top ten teams of the SSL Ranking are here and they will be sailing with 15 VIPs.

The whole Laser Podium from Rio is here: Tom Burton (AUS), Tonci Stipanovic (CRO) and Sam Meech (NZL). The latter will race with kiwi crew Craig Monk, who won the last single-handed medal for NZL at the Olympic Games 25 years ago, when Meech was born. But also Brazilian five-times medalist Robert Scheidt (4th in Rio) and British Nick Thompson (6th).

From the Finn in RIO silver Vasilij Zbogar (SLO) and bronze Caleb Paine (USA)will have a go on the Star, with fourth qualified Jonas Høgh-Christensen (DEN), Jorge Zarif (BRA) and this edition’s rookie Facundo Olezza (ARG), who won one Olympic race in Brazil at 22 years old.

From the 470 class, the first sailing gold Olympic medal for Croatia will be here, Sime Fantela, at his first Star regatta. 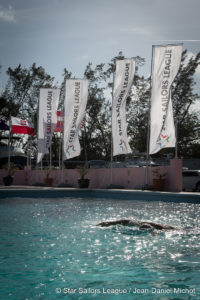 Some of the sailing heroes will be racing in Nassau, Jochen Shümann (GER) with his three gold and one silver medals in Finn and Soling and two America’s Cups; Torben Grael (BRA) – fresh from being appointed World Sailing Vice President – with five Olympic medals, one Volvo Ocean Race and one Louis Vuitton Cup; Mateusz Kusznierewicz (POL), one gold and one bronze medal in the Finn; Paul Cayard (USA), Star World Champion, Louis Vuitton Cup and Volvo Ocean Race winner; SSL President Xavier Rohart (FRA) bronze medal in the Star class; and again Bruno Prada (BRA), Ingo Borkowski (GER) and Pascal Rambeau among the medalists. Augie Diaz (USA), 2016 Star World Champion, Robert Stanjek and Frithjof Kleen (GER), Johannes Polgar and Markus Koy (GER), Diego Negri and Segio Lambertenghi (ITA) and SSL Finals title holders George Szabo (USA) with crew Edoardo Natucci (ITA).
For the fourth edition of the SSL Finals all of the winners of SSL events are present: George Szabo won both SSL Lake Grand Slam in Grandson, SUI, and the SSL Finals in 2015; Robert Scheidt (BRA) who won the first edition of the SSL Finals in 2013 and Mark Mendelblatt (USA) winner in 2014; Xavier Rohart (FRA) champion at the first SSL City Grand Slam in Hamburg in May 2016.
Match Racers Taylor Canfield (ISV), World Tour Champion, and Eric Monnin (SUI) are also here for their first regatta on a Star. They will add some match racing skills to the fleet.

SSL has developed a new racing format, in collaboration with some of the most experienced and skilled sailors of the world. The main goal of this format is to build tension and excitement for the public watching on the internet. The athletes truly believe that the SSL Racing Format completely fulfills this objective without spoiling the nature of sailing as a sport. The introduction of a knockout system inspired by the “play-offs” helps increasing the pressure and ends in the ultimate climax with a ”winner-takes-all” final.

The top 10 teams of the qualifying series access to the Final Day on Saturday December 3rd, which will be raced in a knockout format. The first and second qualified go straight respectively to final and semifinal, so that quarterfinal will be a single race for team ranked third to tenth. Top five teams will access to semifinal to meet the second best of the qualification round in a single race that will decide the three of them that will go to the final to compete for the title with the number one team of the qualification round. (See the diagram below). The winner will be crowned as winner of the 2016 SSL Finals, together with the biggest share of the prize fund.

Full coverage of all five days of action will be streamed live on the Internet with expert commentary from special studio guests, including America’s Cup four time winner Dennis Conner and Olympic silver medalist in London 2012 Luke Patience. On the water, the latest in hi-tech camera technology, as well as Virtual Eye 3D Graphics, will provide thrilling viewing.

Since our audience is present in all parts of the globe, Internet will be our stadium. From November 29th to the Best of the Best Regatta with Bahamian Sloops and junior Bahamian year’s finals on December 4th, regattas will be streamed live on http://d40hnzgvx.preview.infomaniak.website.
Armchair sailors can also race the course with Virtual Regatta.