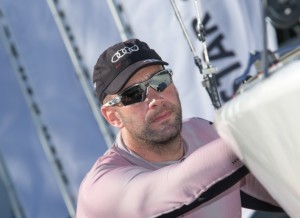 pion in 2015. Markus has also worked on several projects for the German Sailing Team, most recently the Youth Americaâ€™s Cup for which he was a coach and Dragon and GC32 development projects. Markus works for North Sails. As part of this job, he has sailed several design class including Dragons, Stars and J70s, and managed J70 clinics. In the Dragon and Star Class Markus has represented Germany winning four European titles and ten national titles. Markus will be racing with J
ohannes Polgar at the SSL Finals in Nassau, it will be the third time the German pair have been competing

MK: I would be a engineer, which I studied. I am very interested in anything mechanical.

MK: Leaving my family for so many days at home, missing watching my daughters grow up.

MK: I love dogs but they are kind of predictable, cats are more fascinating, having their own way of living.

MK: Liars and people who have no respect.

MK: People who are interested, who asks questions instead of waiting only for questions about them. People with a positive attitude.

MK: Michael Schumacher winning seven world titles, he was such a perfectionist.

SSL: What song, book, film or poem inspires you?

Film: Absolute Giganten, German low budget film which hast the right attitude. Alternatively: Victoria, a great effort by the actors, it is a one take movie, which lasts 2 hours.

Book: Albert Camus, The First Man or The Travelling Diaries. My favourite writer.

MK: Analysing myself and try to learn from mistakes. If you stop improving, you are not good any more.

SSL: How many Gol

MK: As long as the body is committed, I will go for it.

MK: Well depends on the age, but I would try to convince the child that he is real. He can be a great authority for kids.

MK: Flying would be kind handy!

Â 1-6 December 2015 – The third edition of the SSL Finals will take place in Nassau, Bahamas