After an ultra-light wind Quarter and Semi-Finals, the wind on the Nassau’s Montagu Bay finally filled in to provide the best conditions for the four boat finale to the 2019 SSL Finals, the event that seeks to determine the ‘star of the sailing world’.

While the Quarter and Semi-Finals had shown the rich get richer, both with run-away winners, this was not the case in the Final. 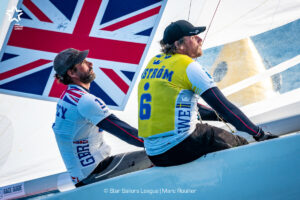 Star World Champions Poland’s Mateusz Kusznierewicz and his Brazilian uber-crew Bruno Prada dropped off the pace on the first upwind, and it was Norwegian-US duo Eivind Melleby and Josh Revkin who led around the top mark ahead of France’s Xavier Rohart and Pierre-Alexis Ponsot with Anglo-Swedish duo Iain Percy and Anders Ekström third. The top three running out of pressure on the first run allowed Kusznierewicz-Prada to recover and as the leaders all rounded the port leeward gate mark, Kusznierewicz-Prada split right. Halfway up the second beat it was all even again between the four.

Comitted to the left paid for Percy-Ekström giving them a tiny lead at the top mark ahead of the French and Melleby-Revkin. They and Rohart-Ponsot gybed early on the final run, but, as the breeze went soft, Melleby-Revkin looked threatening in their own breeze. Coming into the line the lead trio were all overlapped pumping frantically. Initially Rohart-Ponsot appeared ahead but Percy-Ekström finished first. The Olympic legends were crowned SSL Finals champions – 2019’s stars of the sailing world.

“It was tighter than we wanted, but exciting,” said a jubilant Percy. “There must have been three boats within a metre. That’s what it’s all about here – it as brilliant. You keep plugging away and sometimes it works out like it did for us today.”

Ekström, himself a Star World Champion in 2004 and Olympic bronze medallist with Freddy Lööf, added: “I am surprised, but Iain is a great sailor, so I was hoping for us to do well, but maybe not this well! We just kept chipping away, which is what you have to do. We are super happy.”

Xavier Rohart was gratious in defeat, especially by so tiny a margin. “It came down to the pumping – it was Iain, then us, then Iain then us, and then on the last one I had nothing left in the main…” 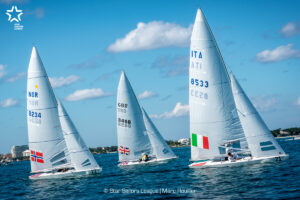 Initially this morning a flat calm brought fears of racing being cancelled. However a six knot northeasterly filled in allowing the race committee to set up a course across Montagu Bay.

In the Quarter-Finals for boats three to ten from the Qualification a tentative start saw Rohart-Ponsot bow forward with a equal left-right split. The French duo were first, but slow into the top mark where they were rolled by Scot Lorenzo Chiavarini and his German crew Kilian Weise who then extended away to claim the race with Norwegian-US duo Eivind Melleby and Josh Revkin second, the French third.

Percy-Ekström had contact with Finnish-Ukrainian pair Oskari Muhonen and Vitalii Kushnir at the leeward gate costing them a penalty. However rather than impair them, it fired them up and they sailed the second beat masterfully, rising to fourth as Muhonen-Kushnir wallowed out on the right with Paul Cayard and Phil Trinter.

At this point the fight was on for fifth– anyone lower would be eliminated. With Percy-Ekström opening up ground over those astern, on the run Brazilians Henrique Haddad and Henry Boening were in fifth, but behind them Cayard-Trinter gybed early and gained while Muhonen-Vitalii Kushnir pulled up after keying into pressure on the left. The end result was a heads down, dash for the line, the three boats overlapped, the Brazilians just squeaking through to the cheers from the fans aboard the spectator craft around the finish area.

With Italian-German duo Diego Negri and Frithjof Kleen fast tracking into the Semi-Finals after coming second in Qualification, the Brazilians were shovelled over the line early leaving them on the back foot for the rest of the race. Meanwhile Rohart-Ponsot once again got off to a great start and, coming back from the right, crossed the fleet. This lead they simply increased, leaving those behind to fight it out.

Up the first beat Chiavarini-Weise also did well on the right and were next round the top mark followed by Melleby-Revkin and Percy-Ekström. However in the ultra-light wind Melleby-Revkin best joined up the veins of breeze to move up to second.

Here all eyes were on the battle for third, those behind due for elimination. In light of this fourth placed Percy-Ekström pulled into the top mark on port, tacking just ahead and to leeward to Negri-Kleen picking up a penalty, but still managing to stay ahead of Chiavarini-Weise.

While it appeared all may have been lost, Percy-Ekström mixed it up on the final run, gybing early. In the ultra-light breeze Negri-Kleen fell into a hole while Percy-Ekström made a better job of hunting down the zephyrs, overtaking them. At the line Melleby-Revkin were second behind the French with Percy-Ekström holding third, gaining the last ticket to the Finals.

Of the 2019 SSL Finals, SSL President Xavier Rohart commented: “This week has gone really well. Today it is possible for almost all kind of racers to come and be competitive. We have right format now to find who is the best sailor in the world. For sure Iain and Anders proved they are today.”