Big conditions for day two of the SSL Finals, the event which sets to determine the ‘stars of the sailing world’, once again largely benefitted the ‘old hands’. Competitors ventured out on to Nassau’s Montegu Bay with its shallow, warm, Bahamas Tourist Board turquoise water, but today this was being whipped up by brisk winds, at times approaching 20 knots, from a similar northwesterly direction to yesterday. 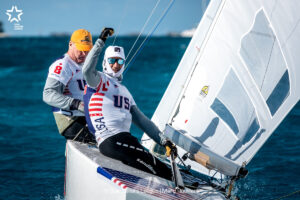 For a second day, the stand-out team was the Italian-German duo of Diego Negri and 2017 SSL Finals winning crew Frithjof Kleen whose 1-2-4 scoreline today has enabling them to pull out a lead of nine points after five races and one discard.

Of winning the first race, Kleen summarised simply: “We played the right side on the upwind, then we had a big lead and just had to bring it home.” Generally of their performance, he added: “We have awesome speed. Downwind we are at times struggling, and with boats coming from behind with the pressure it is tough to defend. We are working hard and have good rhythm. We are sailing constantly, not too aggressively.”

During the second race the wind dropped to around 10-12 knots and in this Anglo-Swedish duo, Star boat legends Iain Percy and Anders Ekström, played the shifts well to lead around the top mark. But Negri-Kleen were chasing them, although reassuringly they followed them around the starboard leeward gate mark. Despite Negri-Kleen’s superior downwind technique, Percy-Ekström hung to take their first win making amends for losing yesterday’s second race when they were pipped at the post by Hamish Pepper and Pedro Trouche.

For Percy-Ekström their win followed a rotten first race. Percy explained: “The wind was really strong and to be honest my muscles weren’t up to it! So we had big gust and I couldn’t pull the main on and we did a Chinese gybe – a first for me in a Star! Anders went for a swim, but he managed to hold on. It was a bad race, so it was good to bounce back.”

Sailing legend Paul Cayard is the oldest competitor here, yet looks the fittest and in a remarkable display of resilience, it was he and his Athens 2004 crew Phil Trinter who won the third race. In this, with the breeze back up into the high teens, the all-American duo gained the lead going into the leeward gate and then picking the favoured right side of the second beat. However Cayard maintained the hard work was done on the first beat: “It is very shifty out there and we decided to hit the right hard and for a while it wasn’t looking good, but then the wind went our way and we were able to get back and cross the whole fleet. That set us up to go around the weather mark second. If that doesn’t happen you are buried and the racing is so volatile with those puffs.” 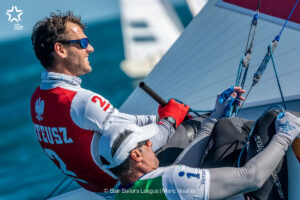 A 4-14-1 with the middle result discarded elevated Cayard-Trinter to third overall, two points behind Mateusz Kusznierewicz and Bruno Prada. In addition to Negri-Kleen, the Polish-Brazilian reigning World Champions, were the only others to score single figure results, posting a 3-9-2 today. They led around the top mark in the opening race. “Today it was not about settings, it was more about the technique of driving the boat,” said Kusznierewicz. “But we also have a winning boat that is very well balanced boat with new sails.”

Among the newbie Star sailors here Finland’s Oskari Muhonen double Finn Silver Cup winner, sailing with the Ukraine’s Vitalii Kushnir, scored a 5-5 in today’s last two races and hold sixth place overall. However 25-years-olds, Scot Lorenzo Chiavarini and German Kilian Weise, were third in today’s last race. Of that Chiavarini said: “We struggled to get out in clean air, but we got into a decent place, then on the downwind we started to gain metres on the group in front.”

Unfortunately this came after two races where they were scored DNF after they twice broke their forestay and twice had to return to Nassau Yacht Club to effect a repair. Chiavarini said: “The shore team was exceptional and helped us to get to the next race twice. Both times it took us 10 minutes to get back out. It was cool to bounce back – it showed we were calm and did everything we could.”

Tomorrow another three races are scheduled to start again at 1100 local time, when the wind is expected to be lighter. The consensus is that this could create a fresh set of winners.