Double Olympic Star medallist and Beijing 2008 champion Iain Percy returns to Nassau and the Star Sailors League Finals this year alongside with his old rival and close friend Swede Anders Ekström. They will be sailing with a spiritual third crewman on board in the late Andrew Simpson who was lost six and half years ago in a tragic sailing accident. Simpson was Percy’s best friend and long term Star crew, while Ekström had also been close to the amiable Brit following their years campaigning in the former Olympic keelboat. 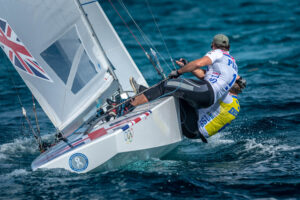 While this might seem sombre, in fact the mood between the duo is far from this and they say they will be out on the race course next week looking to enjoy themselves. “We are very excited – it is the only ‘real’ sailing we do like these days!” quips Percy, who in fact sails alongside Ekström on board Torbjörn Törnqvist’s Artemis Racing yacht in the 44Cup. “There are lots of reasons why we both like the Star and we were both very close to Bart,” he continues. “It is like the old days! Star sailing – it takes 10 years off you!”

So like riding a bike? “Yes, but painfully!” says Ekström shifting in his seat. “But meeting everyone is good and it is great racing.”

Of the Star Sailors League Finals, Percy is a fan: “It is a brilliant concept and I love the boat. The Star is a fantastic leveller and that’s has been proven for years. If you look back at past Star World Championships, it must have happened five or eight times where a person has stepped into the boat and wins in the first year. We [with Stevie Mitchell] were one – Anders [with Freddie Lööf] was another. Although it is a very complex boat, it is also very simple – sticking to the tuning guide is not a bad starting point. In fact it only starts to all go wrong after that when you start trying to work it out!”

Once again the duo will be sailing the Star boat in which Percy and Simpson secured silver at London 2012, although both admit that this is unlikely to have much effect on their results. “My opinion is that if me and Anders had a week of training we’d be in good shape,” continues Percy. “It always feels like on the last day of the event you are starting to get in tune and starting to go well. That happened in the Bacardi Cup last year when we won the last race. Maybe we got lucky, but we also felt like we were getting there finally…”

This time the dynamic duo will be getting two days to train before the SSL Finals set sail next Tuesday. While they might joke about their campaign, be in no doubt that come race day they will be fully focussed, their competitive juices in full flow. 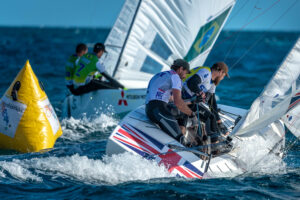 “Anders can’t believe what a psychopath I become!” says Percy only half-jokingly of his Jeckyll and Hyde transformation once the start gun goes. His crew all too clearly remembers this: “I did see it back in the old days when we were on different boats, or you could hear it anyway! It is good to see it up close and personal. I’m pleased he’s on my side now!”

In fact Percy admits his shouting is less directed competitors and usually just venting his own frustration. “In my earlier days there were a few other victims, but now it is just myself – I am the victim of my own shouting! That’s the thing. It is normally addressed to myself.” “Or the wind!” Ekström adds.

As to how Star sailing differs today compared to their last campaigns, both agree that the greatest change is the removable of restrictions on pumping. “It isn’t better or worse, just very different, especially downwind,” says Ekström. Percy adds: “I prefer that it is not in the hands of the judges any more. We have all had moments where we have got a yellow flag, thinking we haven’t done anything different to what we normally do and that has changed events, etc. That said it is a different technique that we don’t know, so it is a bit frustrating. It would be fun to learn. If we do get a couple of days we will try and get that technique going.”

Perhaps the unlimited pumping helps those currently full-time on Olympic campaigns. Percy continues: “That’s a technique they are used to and we’re not….And the hiking! But it was always like that. When you came from a Laser or a Finn, you were pretty good in the Star from the outset because you hike hard, whereas we are not like Star sailors any more, we are less hiking-trained…”

While they have both done the hard yards in the Star, and have even been training partners, sailing together – who does what and when – takes some negotiation and practice. “We are both aware that it feels very rough compared to how it used to be in terms of our own performance and in the team work stuff, but we both have good ability, so sometimes it clicks and feels right for both of us, but at other times it doesn’t… ” says Percy.

This year the Star Sailors League Finals has much broader range of ‘stars of the sailing world’ than ever before. Some of the old guard, legends of the Star class, remain, such as Cayard and George Szabo, then there is the last generation Olympic Star sailors such as Percy, Lööf, Rohart, Pepper, Melleby and Kusznierewicz. They will face a trio of former Match Racing World Champions – Ian Williams, Taylor Canfield and Torvar Mirsky. Most of the sailors currently campaigning for Beijing 2020 aren’t coming, with the exception of Croatia’s Rio 2016 Laser silver medallist Tonci Stipanovic. Then there are new faces such as Snipe World Champion Henrique Haddad and the 2018 5.5 Metre World Champion and local hero from the Bahamas, Mark Holowesko. Once again there are some youngsters competing such as 22-year-old Oskari Muhonen, the Finn Silver Cup (Junior) winner and British Laser sailor Lorenzo Chiavarini.

Endorsing Percy’s point about sailors fresh from the Laser and Finn making the best Star sailors, it is interesting to note that the last two winners – Paul Goodison and Jorge Zarif – follow this theory. “They do a lot of sailing over the year,” observes Ekström of the modern day Olympian who try their hand at the Star. But then there are also many Star sailors who continue to race regularly. Cayard especially is one, while returning to this event with considerable training time too is Diego Negri and Frithjof Kleen, who finished third at last year’s SSL Finals. In contrast Percy and Ekström maintain they are at the polar opposite end of the training spectrum.

Both are also looking forward to being in the Bahamas: “It is a beautiful place and there are a lot worse things to be doing in December,” says Percy. “It will be fun. We are very grateful and the SSL is such a great thing – it promotes the boat, promotes sailing and sailors, it is fantastic.”