A lighter 6-12 knot day on Nassau’s Montagu Bay brought a fresh set of winners among the 23 competing teams on day three of the SSL Finals, the event determining 2019’s ‘stars of the sailing world’.

Star of the day was Australian Torvar Mirsky, sailing with Ireland’s Robert O’Leary. With the wind due north, the 2017 Match Racing World Champion was unbeatable upwind, leading at the top mark in all three of today’s races. However it was only in the second when they converted this to their first bullet. 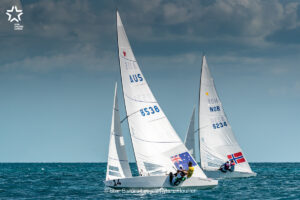 “It was a splendid day – I’m really stoked,” said a jubilant Mirsky once ashore at the Nassau Yacht Club. “We were struggling a little downwind, but we were at the front of the fleet, which was really cool. In the lighter conditions we could look around a bit so we were able to tack, play the fleet and the shifts a little bit. We held on to most of it…”

Of his first SSL Finals Mirsky commented: “It is spectacular – humbling to be among such a concentration of sailing legends.”

Tensions had clearly risen today with it taking three attempts to send off the first race. The final of these was under the U flag, and, disastrously, OCS with Ricardo Fabini and Federico Calegari, were Diego Negri and Frithjof Kleen, the stand-out leaders going into today. This cost them 24 points, which might not have done too much harm being their discard, but in the second race they only managed a 21st. Ultimately a dreadful 56 point day dropped them to third overall, 13 points behind overall leaders Mateusz Kusznierewicz and Bruno Prada, the Polish-Brazilian reigning Star World Champions.

The first race ended in a match race between US duo Eric Doyle and Payson Infelise and Brazilians, the young Snipe World Champion Henrique Haddad and Star veteran Henry Boening.

Doyle commented: “We didn’t have a great start, but we did well in a couple of shifts up the beat. It was a really good battle on the last run, because you had to gybe on every shift, and everyone was going for it really hard. It was great fun and we just squeaked out in front of the Brazilians.”

In the second race, Croats Tonči Stipanović and Tudor Bilić were called over early. As Stipanović explained: “After the first race we decided we had to push more, but at the start the Uruguayan guys pushed us over. When I saw our number on the board [OCS] I was really disappointed, we were pushing too much.” There was some consolation in the last race when the Rio 2016 Laser silver medallist finished fifth, his best result so far. 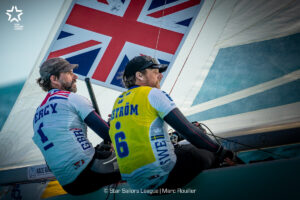 The third race saw the most contention for the lead with Olympic legends Iain Percy and Anders Ekström putting in their best result of the day – a second, which with their 5-13 earlier left them second overall, 10 points off the lead.

Despite it being ultra-close at the second top mark rounding with Percy-Ekström, Mirsky-O’Leary and France’s Xavier Rohart and Pierre-Alexis Ponsot, just nosing ahead were the Kiwi-Brazilian pair, Hamish Pepper and defending SSL Finals champion Pedro Trouche.

Pepper explained: “In the last race I was more confident in my game plan and could protect the right.” As to the end of the second upwind he added:  “We were a bit lucky there – we tacked, got a bit of a header so we could sneak in front of Torvar and Iain.” Sadly for Pepper this win followed two 20th placed finishes leaving them in 11th overall. 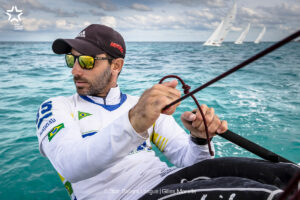 Also going well today were Brazilians Haddad and Boening who posted a 2-7-7, leaving them 10th. “For sure the light conditions were better for us, but we were really aggressive with our plan to stay on the right side on the upwinds, where the big puffs and shifts were coming from,” explained Haddad. As to beating the heroes of the sport he added: “It is something that we don’t think about on the water, but when we look at the results and are ahead of many of them, it is a great feeling.”

Another three races are scheduled tomorrow starting at 1100. These will be the last of the qualification round. After this the top 10 alone will be heading on to Saturday’s Finals rounds.

Top 10 results after eight races and one discard: