After four days of Qualification racing the first major cull took place today at the SSL Finals, the event that seeks to determine the ‘stars of the sailing world’. With the top ten of the 23 teams going through to tomorrow’s Finals rounds, the focus for once was not on the top of the leaderboard but on the mid-fleet where those in or around the cusp of tenth place were having to fight for their lives. 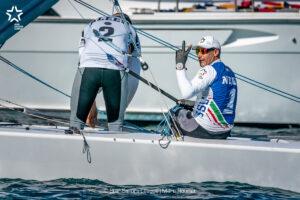 Out on Nassau’s Montagu Bay, the racing today took on a different complexion with flat water and the wind, for the first time this week, blowing onshore, out of the east. With the wind barely exceeding five knots, the crews received a further test with the order of the day being to keep the boat going at all costs.

In the first race it was Brazilians Henrique Haddad and Henry Boening, sitting right on the cusp in 10th place overall, who found pressure initially on the right before tacking and crossing the fleet. From here, being out in clear air paid for the Snipe World Champion and his Star veteran crew (fresh from winning the Star Brazilian Nationals with his regular helm Lars Grael) who simply extended away.

“Our strategy was to focus on the first two races, because if we did those well we could fight to be in the top 10,” explained Haddad. “In the first race we did an amazing job and then in the second we were top 10 again. We saw in our training that we were fast in light conditions….”

The Brazilians ended the day in seventh. “I didn’t expect to do this well. We said we could fight for the top 10 but we have been getting better and more confident every day,” concluded Haddad.

Surprisingly, there was a repeat of yesterday’s occurrence when the overall leader of the 2019 SSL Finals was called OCS in the first race, Mateusz Kusznierewicz and his uber-crew Bruno Prada only learning about this as they rounded the top mark. However unlike Diego Negri and Frithjof Kleen yesterday, the Polish-Brazilian duo bounced back superbly to win the second race. In this, they performed a ‘horizon job’ on the fleet just as the Brazilians had done in the race before them. “In these conditions you have to sail your own race,” said Kusznierewicz. “We had a plan and we knew where the first wind shift would come from. We had a safe but good start and focussed on the first shift and it brought us this incredible advantage, separating us hugely from the rest of the fleet. 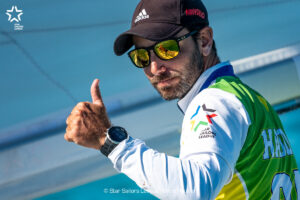 “I am pleased we won the last race, because although we were ahead in the overall results, this was the first race we have won and this brought us confidence.”

With the wind looking marginal at times in the second race, the race committee opted to cancel the third race. This brought Qualifying to a close, disappointing for the crews immediately outside of the top 10 who had hoped to have one last roll of the dice.

However it came as some relief for the USA’s Eric Doyle and Payson Infelise who after today’s second race held the vital 10th spot, although Doyle said he would have been more than happy to have had sailed a third race. “We were going good – we had a nice first race and a good second one, although we got unlucky in some lulls, then we had a rocking penalty. We are just getting better and better and hitting our stride. It is always good to do more.”

The unfortunate group in 11th and beyond were led by Hamish Pepper and Pedro Trouche. Having won the last race yesterday, the Kiwi helm and his Brazilian crew, who is defending champion at the SSL Finals, had another up-and-down day posting a 20-6 leaving them eight points adrift of Doyle and Infelise.

Similarly, after an outstanding day three of the SSL Finals when they were first to the windward mark in all three races, Australian Torvar Mirsky and Ireland’s Robert O’Leary appeared to have lost their stride today and was the only team to drop out of the 10, having started the day in ninth.

Coming out on top of the Qualification round means that Kusznierewicz-Prada fast track straight through to tomorrow’s Final round. After a miserable day that saw Iain Percy and Anders Ekström plummet from second place overall to sixth, Diego Negri and Frithjof Kleen ended the Qualification round second overall, which will see them heading straight for the Semi-Final round tomorrow.

The Finals rounds begin tomorrow with the Quarter Finals at 1100 for the boats which finished the Qualification round third to tenth. The top five from this progress up to the Semi-Finals and the top three from the Semi-Finals to the Finals – each stage comprising a single race.

For the top ten crews, this represents a resetting of the clock, with any capable of claiming the ultimate prize and their share of the US $ 200,000 purse.

Top 10 results after ten races and one discard: