For the opening day of competition at the SSL Finals to determine 2019’s ‘star of the sailing world’, Nassau laid on perfect conditions with glorious sunshine, an ultra-shifty northwesterly and flat water out on Montagu Bay for the 23 crews from 22 nations.

Among the diverse fleet of former, current and future Olympic sailors plus many from other disciplines such as match racing, the Snipe and 5.5mR, day one’s two races belonged to last generation Olympic Star boat sailors.

A significant left shift on the start line in the opening race saw the full fleet quickly tack on to port. While American 2015 SSL Finals winner George Szabo and his Italian crew Edoardo Natucci were strongest among those on the left it was Diego Negri and Frithjof Kleen that got off the line best at the race committee boat and were most committed to the paying right. The Italian-German duo, Kleen being the 2017 SSL Finals winner as crew for Paul Goodison, were ahead when they tacked back, had pulled out a substantial lead at the top mark and were subsequently never threatened.

“It was great – we were reading the course well, because it was shifting a lot,” commented Negri. “The wind was dropping, but we stayed calm and in control and from there it was easy.”

Perhaps more impressive was how Negri and Kleen then dug themselves out having been buried at the start of the second race. In the latter half of the fleet at the first top mark rounding, by the second they had elevated themselves to fourth place and ultimately finished sixth, leaving them second overall at the end of day one.

After one general recall, race two also looked set to be another clear cut affair with two time Olympic champion Iain Percy, sailing with Swede Anders Ekström, winning the pin and committing to the left to lead at the top mark. The first run went less well with Roberto Bermúdez de Castro and Miguel Fernandez Vasco, Spain’s first representatives at the SSL Finals, drawing level, splitting at the leeward gate.

Percy and Ekström had regained the advantage at the second top mark rounding. Here Norwegian-US duo Eivind Melleby and Josh Revkin had pulled up to second ahead of the Spanish with the Kiwi-Brazilian team of Hamish Pepper and Pedro Trouche in fifth ahead of Swedish-US combo Freddy Lööf and Brian Fatih. On the final run most gybed early, but Pepper and Trouche alone remained on starboard, and separating from the masses found better pressure. Converging with Percy-Ekström on the finish line, they pipped them at the post. 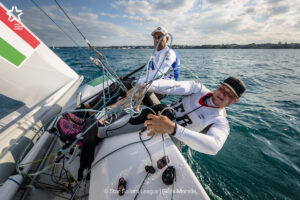 Of their day Percy observed: “Generally today was a case of brushing the dust off. I think we had the reactions of a 90-year-old in the first race and by the second we had the reactions of a 70-year-old! Reactions were important today because you needed to be able to make quick decisions in response to the wind shifts because they were so big.” Otherwise Percy was happy with their speed: “We are pretty good downwind, although not like the old days. Upwind will come. Our set-up isn’t quite right, but that’s a matter of millimetres.”

Hamish Pepper, the sole New Zealand competitor, sailing with Trouche, the defending SSL Finals champion, was pleased with the outcome. “Pedro called to go straight on the run and I agreed with that. We got in a good lane and good pressure and it fell into place. I feel sorry for Iain [Percy] because he was leading from the get-go, but sometimes when you cover the field it doesn’t pay off. But we’ll take it!”

At the end of day one Melleby-Revkin lead by a point. “Being leader after the first day doesn’t mean that much, but it is nice to have confirmation you’re on the pace. Hopefully we can keep it together for the week,” said Melleby. “Today we had 30-40° shifts, sometimes 50. It was just a matter of getting off the starting line and playing the shifts immediately so you can get ahead. But the more shifty it is, the more we like it!”

If the London 2012 Star sailors hold most of top 10 positions, but with US duo Paul Cayard and Phil Trinter seventh and the youngest pairing of 25-year-olds Scot Lorenzo Chiavarini and Germany’s Kilian Weise in ninth, the greatest surprise is that third place is currently held by the youngest sailor in the fleet, Finland’s two time Finn Silver Cup winner Oskari Muhonen aged 22, sailing with Ukrainian Vitalii Kushnir.

“I like these tricky, shifty winds,” said Muhonen. “We were struggling with downwind speed because we haven’t trained much, but upwind was really good as were our tactics. We are getting better and better. The main thing was to stay on the lifting shift and to lay. I am really happy.”

Racing tomorrow begins at 1100 when four races are scheduled. Qualification racing continues until Friday with the final rounds taking place on Saturday.