The Star Sailors League (SSL) was established in January 2013, the organisation allocates points from Star Class Regatta all over the world to define an annual SSL World Rankings for well over 2000 sailors. In December each year, the cream of the crop gather in Nassau Bahamas. Only the top 12 teams make the  SSL Finals and they are joined by VIPs from other sailing classes, to decide the winner of the title and take a lion’s share of  the $200,000 Prize Purse. This year will be the fourth edition of the SSL Finals and every year there has been a different winner.

18 teams gathered at the Nassau Yacht Club for the inaugural Star Sailors League Finals in December 2013, and to be honest, nobody really knew how the event would turn out. The new knockout style final day, the relaxation of sailor kinetics, and the introduction of VIPs from other sailing classes – this was all new territory.

Nassau delivered classic trade winds conditions with solid breeze for the five days regatta. Ten teams made the knockout stages but only four contested the final, a single race with the first crossing the line winning the 2013 SSL crown. Robert Scheidt and Bruno Prada (BRA) had dominated the qualifying rounds taking podium positions in all but one race. Scheidt and Prada had a scare in the first knockout round but managed to hang on to scrape into the semi-final. The Brazilians dominated from there, winning the final by a hansom margin. Mateusz Kusznierewicz and Dominik Zycki (POL) did not manage a single podium finish until the final, but that is the name of the game in knockout; making the cut is all you need to achieve. A solid performance downwind in the final gave the Polish duo the Silver Medal. Mark Mendelblatt & Brian Fatih (USA) performed consistently throughout to take the Bronze Medal. Diego Negri & Sergio Lambertenghi (ITA) had looked to be the fastest team upwind for the whole regatta but threw the dice in the final, taking a different side of the race course, which didn’t pay off, leaving the Italian duo in fourth. 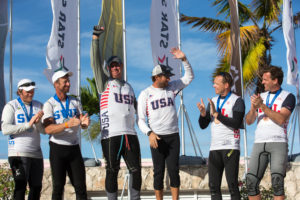 20 teams, two more than the previous year took part in the second edition, but what was really interesting was the acceptance of top sailors from other classes to compete. In all six of the teams were helmed by VIP skippers, and most of them were world class sailors from the Finn Class, such as European Finn Champion, Ivan Gaspic (CRO), two time Finn World Champion and soon to become Olympic Gold medallist , Giles Scott (GBR), and a young Brazilian sailor, Jorge Zarif, who in 2013 had become the first sailor to win the Finn Junior and Senior World Championship in the same year. The SSL introduced a new feature, a bye for the winner of the Qualifying rounds, straight into the semi-final.

Freddie Loof & Anders Ekstrom (SWE) were together for the event, and it was a first time back on a Star for Loof after winning Olympic Gold in 2012 with Max Salminen. They had a terrific battle with the defending SSL champions Robert Scheidt & Bruno Prada (BRA) in the qualifiers. The Swedes won the last race of the qualifying rounds to claim the bye and bragging rights for the final knockout rounds.

For the final day, the breeze was up and so was the intensity, Mateusz Kusznierewicz & Dominik Zycki (POL) showed their strength in heavy airs to win the quarter-final. Mark Mendelblatt & Brian Fatih (USA) looked strong to win the semi-final. Two of the VIP skippers were in great form; Giles Scott & Steve Milne (GBR) made the semi-final, and Jorge Zarif & Henry Boening (BRA) made it to the final. However, there was no place in the final for defending SSL champions Scheidt & Prada.

The four finalists were Loof & Ekstrom, Mendelblatt & Fatih, Zarif & Boening and Kusznierewicz & Zycki . All four teams led at different stages of the race but Mendleblatt & Fatih peaked at the end to take a magnificent win from Loof and Ekstrom. Kusznierewicz & Zycki  made the podium for the second year and  Zarif & Boening were fourth, but with the consolation of having beaten five Star World Champions, including two of their heroes; Robert Scheidt and Torben Grael. 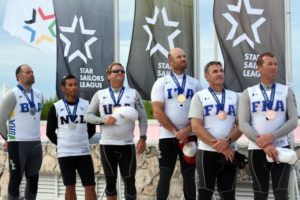 In 2015 the first ever SSL Lake Grand Slam took place in Grandson, Switzerland, in September. More than 80 boats fought hard on Lac de Neuchâtel with tricky lake conditions. Five days of great racing with the incredible Opening at the Olympic Museum in Lausanne at the presence of IOC President Thomas Bach and the unveiling of a temporary exposition of two wax statues representing Torben Grael and Mark Reynold in their original Olympic sailing gear, surrounded by boats, gears and memorabilia given by the SSL Olympic champions. On the water, George Szabo (USA) and local crew Patrick “LeDuc” Ducommun won the SSL Lake Grand Slam with a thrilling light wind final.

19 teams gathered at the Nassau Yacht Club for the third edition of the Star Sailors League Finals, and by now the SSL had become a must-do regatta for an amazing collection of sailors. Nine Olympic medalists and numerous World Champions took part, with over 100,000 race fans tuning in to watch the action, live and free on the internet.

The regatta was held in unusually light winds, off Montagu Bay Nassau. The quality within the fleet was exemplified on the opening day, with four different team winning each race, and seven teams gaining podium positions. The second day was once again held in the light, and this seemed to suit the VIP entries, with six teams getting into the groove and the precious top eleven.

The third day of the qualification rounds proved to be a non-event with no wind, and the threat of lightening, forcing the race committee to abandon racing. Rohart & Ponsot (FRA) started the day as leaders of the regatta and retained their lead. Negri & Lambertenghi (ITA) was 2nd  overall and Kusznierewicz & Zycki (POL) 3rd.. Pepper & Prada (NZL-BRA)  was the top VIP entry in 4th.

The 2015 Star Sailors League Finals came to a dramatic conclusion the following day. Between the 22 sailors, that made the Finals, they had totalled 28 Olympic campaigns and over a dozen America’s Cups. The quality of racing and intensity of the battle was phenomenal.

Four teams contested the final and there was drama right at the start with Pepper & Prada (NZL/BRA) and Rohart & Ponsot (FRA) ordered to do penalty turns by the on-the-water Jury. There was even more drama as Polgar & Koy (GER) on port tack, tried to cross the bow of Szabo & Natucci (USA/ITA) and didn’t make it, taking a penalty turn. Pepper & Prada had speared off to the less-favoured right side of the course, but got into really good lifting pressure, to make it to the top mark in first place by less than a boat length from Szabo & Natucci. At the next mark, Szabo and Natucci made a perfect rounding to get into phase earlier to take up the lead, but back came Pepper & Prada to regain the lead on the penultimate leg.

However, there was one last twist. Pepper & Prada gybed to the middle of the course on the final downwind leg, whilst Szabo & Natucci stayed out to the Rose Island side of the course. This turned out to be the winning move. Szabo & Natucci took the gun and the win by a boat length from Pepper & Prada. Rohart & Ponsot completed the podium, to take third place, and Polgar & Koy was fourth. 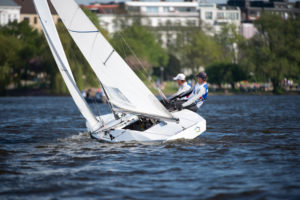 2016 opened with another ‘first’: in Hamburg, Germany, the first SSL City Grand Slam was held with the cooperation of Norddeutscher Regatta Verein and Hamburger and Luebeck Bay Star Boat fleet. More than 100 entries had to be cut to 80 to allow racing on the picturesque lake Alster. A week of great weather conditions both for the sailors and for the numerous spectators escaping from the offices downtown to watch the action. SSL President Xavier Rohart won his first SSL event in Hamburg with crew Pierre-Alexis Ponsot, on a hard knockout races on the last day, where the Italian duo Diego Negri and Sergio Lambertenghi arrived as favorites with a bye to the final for winning the qualifying series.

And in just 10 days the 4th edition of the  SSL Finals will feature more team than ever before, 25 teams from 17 different countries will compete. The list of competitors is astounding. Among them are three of the six most medalled sailors of all time; a total of 16 Olympic medallists with six Olympic champions, two America’s Cup winners, two Volvo Ocean Race Winners, two Louis Vuitton Cup winners and one match race world champion. The complete Rio 2016 Laser Men’s podium will race together along with four other medallists from Rio.

From November 29th to December 4th, the regatta will be streamed live and free on http://d40hnzgvx.preview.infomaniak.website.
A complete live video stream of the races as well as additional insights provided by the state-of-the-art tracking system developed by Virtual Eye, will allow people from over the world to follow their favourites and cheer for them. Many prestigious sailing websites around the globe will also share our live broadcast on their homepage. Armchair sailors can also race the course with Virtual Regatta.
For more information visit
finals.starsailors.com