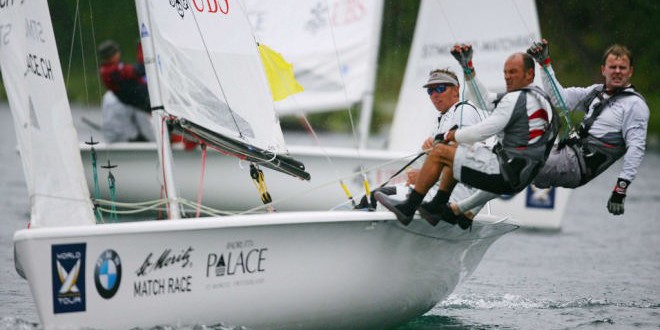 In December 2015, Jochen SchÃ¼mann will be competing in the Star Sailors League (SSL) Final in Nassau, Bahamas, as a VIP, sailing with fellow German crew, Ingo Borokowski. The SSL is a new concept in yacht racing, where sailors from the Star Class compete with VIP sailors from other disciplines, such as the Finn and the Laser. All SSL events have a knock-out format and prize money.

Jochen SchÃ¼mann has competed at four Olympic games, winning three Gold medals and one Silver medal in the Finn and Soling Class. Jochen has won the America’s Cup on two occasions with Swiss team Alinghi and is considered to be Germany’s most successful sailor of all time. Jochen has won the ISAF World Sailor of the Year Award and in recent year’s has skippered Maxi, Esimit Europa 2 to numerous line honours wins and world records in offshore racing.

JS: An architect; I like simplicity, the perfect harmony of function, structure and style.

JS: Missing time for friends , who are not sailors.

JS: Dolphins; the elegance and power of their motion as well as their social behaviour.

SSL: What kind of a person makes you angry or happy ?

JS: People who are undecided, who keep saying what they do not want make me angry. People who enjoy daily action make me happy.

JS:Jules Verne’s Around the World in Eighty Days â€“ I still have to do itâ€¦

SSL: Is there any specific technique you use when competing to help motivate yourself?

JS: Not really, just be more efficient than others, work harder then you achieve the results.

JS: Wolfgang Amadeus Mozart â€“ I believe , he was crazy and very entertaining â€“ but notÂ Â Â Â  classic at all!

SSL: How many Golds/World Championships is ‘enough’.

JS: It is always about the most current one

JS: I would control the winds â€¦